The garden suburb of Wekerletelep was built between 1908 and 1921 on the outskirts of Budapest to accommodate its growing population, laid out along garden city lines in a square plot with a radiating axial layout plan.

In particular there was large scale immigration from the countryside, and the need for housing for these rural workers may have influenced the choice of building a garden settlement. It was built on land purchased by the government on the outskirts of the city. Reminiscent of Hampstead Garden Suburb, Wekerle included a central square with schools, churches, cinema and police station, creating a self-contained community on the edge of the city. Its houses were designed in a mix of arts and crafts and local vernacular style, with gardens, allotments and tree lined streets and squares. Now no longer on the outskirts of the city, the area retains its feel of a village within a city. It was made a national monument in 2011. 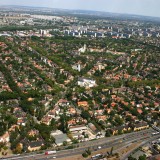