Tapiola was built by the private non-profit organisation the Asuntosaatio (the Housing Foundation), which was formed in 1951 under the leadership of Heikki von Hertzen, a garden city advocate. Their aim was to build a self supporting community of 12,000 residents, with its own services and employment opportunities.

Construction began in 1952 on a site six miles from Helsinki, and lasted for almost 20 years. The original plans by Otto Meurman included individual houses each with its own garden. Economic constraints, however, meant that the majority of housing was in the form of apartment blocks although the areas forest setting and low density was retaining. These revised plans were the work of a group of prominent Finnish architects, including Aarne Ervi, Alvar Aalto, and Kaija Siren took, each working on different area of the site. The area is still controlled and maintained by Asuntosaatio.

Other notable features that reflect Garden City Principles
Heikki von Hertzen set out to copy the Garden City model, which was enjoying a revival in England with the programme of New Towns being built. Even as late as the 1940s many poor families in Helsinki were living in single rooms in squalid conditions – so his focus was on the health and happiness of Finland’s children especially. 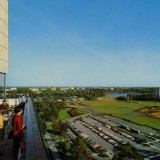