The area was the first development in the United States based on the ideas of the garden city movement initiated in England. It consists of a series of nine “courts” or rows of townhouses and nine small apartment buildings (four to six stories tall), built on all or part of 16 blocks, a total of more than 600 buildings.
Many elements of the original landscape, including large street trees and some courtyard plantings are still existent. The original population included office and factory workers from a variety of backgrounds.

Built from 1924 to 1928
After the first year’s construction of Sunnyside Gardens, the developers famously advertised that only 28% of the available land was built upon, and it is possible that this was a record low density for New York City.

Architectural style/qualities:
Colonial Revival and Art Deco.
All buildings were faced with Hudson River brick, as it was inexpensive and durable, requiring minimal upkeep.
Designers varied the roof shapes and added features such as fanlights and small porticos to add visual interest.
Stein and wright had decided that they did not want revolutionary architecture as many other ideas introduced were more unusual.

Housing/other built form densities
Low density, low-rise
All private houses are 2 stories, usually flat-roofed but sometimes with the addition of an attic, and the original apartment buildings are all 3 or 4 stories.

Value capture mechanisms
Some Court Associations (homeowner associations) charge modest dues that are applied to gardening and maintenance– and in a few cases, utilities like lighting and sewer. Sunnyside Park is operated through dues and has a not-for-profit foundation to gather additional funding.

Mixed-tenure homes and housing types that are affordable for ordinary people –
The City Housing Corporation, a limited dividend company, was created by Alexander Bing to build at Sunnyside and to show that solid, well-designed homes could be built for working people and still allow for a 6% return on an investor’s capitol

Beautifully and imaginatively designed homes with gardens, combining the very best of town and country living to create healthy homes in vibrant communities
Use of cooperative buildings – six small apartment buildings, housing 40 families. A first mortgage was issued from a trust company and a second mortgage, held by the City Housing Corporation at 6% interest, secured by stock in the Association, enabled people with lower incomes to purchase these apartments.

generous green space linked to the wider natural environment
In 1926 a 3 acre community park with facilities and includes a communal garden was opened and still used in the same way today.

Quote from resident/person works there
Long-time resident Lewis Mumford called Sunnyside Gardens “an exceptional community laid out by people who were deeply human and who gave the place a permanent expression of that humanness.” 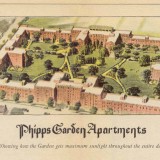