Poland’s signature Garden Suburb, Podkowa Lesna (literally ‘Horseshoe Grove’) was built in the 1920s following the arrival of the electric commuter railway from the outskirts of Warsaw to the city centre.

Podkowa Leśna, Warsaw was designed in 1925 by Anthony Jawornicki.
The establishment of the Electric Commuter Rail in the 1920s opened up the outskirts of the city for residential development.
In a similar design to Letchworth Garden City, the housing was planned in concentric tree-lined streets, organised in a horseshoe shape, with the train station at its centre.
Whilst the urban layout has remained intact, some of the architecture has suffered from unsympathetic alterations. 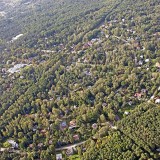