Milanino, a suburb of Milan, was a garden village founded in 1907 and inspired by English designs (Letchworth Garden City and Hampstead Garden Suburb were named influences).

The initiative was that of Luigi Buffoli, founder and president of the Cooperative Union, created in 1886 and aimed at helping the middle class with their “habitative needs”: to build “hygienic, cheap, small houses”.
It was an ambitious project for which 1,300,000m² of land in the town of Cusano, north of the city were selected. Two-storey buildings were planned, in low densities, with plenty of space for large gardens.
It was, however, only partially completed, due partly to the global financial crisis that affected the Cooperative Union in the Twenties and halted development, and partly because of the failure to complete the high speed tramway line connection with the city that had been promised.

Architectural Style/qualities
The design of the district focused on a 60m wide tree-lined straight axis (now Avenue Buffoli), with circular roads north and south and winding tree-lined residential streets radiating off both.
Architecturally, apart from the odd example of neoclassic recovery, there are mainly small villas in Romanesque or Renaissance stye. 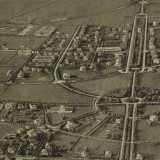