One of the first planned settlements in Canada, designed along Garden City lines, around a main local industry, Spruce Falls paper mill, who have printed The New York Times since 1928.

Kapuskasing in Ontario was directly influenced by the Garden City Movement in the UK as well as the American ‘City Beautiful’ movement. However it was still associated with a single industry, the Spruce Falls Company, a paper & pulp mill which since 1926 and to this day produces the paper used to print the New York Times.

The original plan for Kapuskasing by Alfred Hall was completed in 1921, with the intention that it would become a prototype for other communities and a model for other company towns.

The layout was carefully planned, with formal street patterns, and a strong focus on open space with
the river and public parks prominent.

Industrial areas were kept on the fringe of the town with commercial areas located in the centre.  Numerous public buildings were incorporated, and much of the housing was in a similar form to that found in Letchworth.

The town was a municipality seeking to incorporate a community ownership model, and not company controlled, which differed from other such industrial towns.

Subsequent development was frustrated by a bridge linking the rail station with the primary business areas, leading to Hall’s plan not being implemented in its entirety, although enhanced landscaping programmes took
place in 1927. Later development of the town did not reflect original principles. Some land removed from the municipality between 1928 and 1932 was returned by 1964 but the development that had taken place during that time hadn’t reflected Hall’s original ideals.

Today Kapuskasing houses approximately 8,500 people, with many original components of the town protected.

Much of the domestic architecture is inspored by early Letchworth housing.. 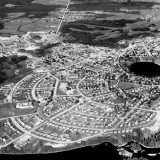