Established in 1917 Jardim América is perhaps the most famous garden city inspired example in Brazil and was designed by Barry Parker in a suburb of São Paulo.

The picturesque suburb plan featured boulevards and curving avenues lined with Jacaranda trees, with low density, detached family housing appealing to and affordable by upper middle class residents.
There were departures from the Letchworth model - no-one wanted to maintain communal gardens given the historical association between gardening and manual labour in a formerly slave owning society.

Jardim America influenced a range of other garden suburb designs including for Jardim Paulista, Jardim Europa and Alto da Lapa and other São Paulo neighbourhoods as well as in other Brazilian cities.

A district within Jardim Paulista, a suburb of the municipality of Sao Paulo, which is the capital of the State of Sao Paulo which has a government & legislative assembly. 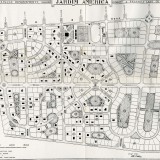