First gartenstadt in Germany, located four miles from Dresden and connected to it by tram. Created by Karl Shmidt, owner of furniture company Deutshe Werkstätten für Handwerkskunst (German Workshop for Handcrafted art). The village was arranged around the principle factory, designed by Richard Riemerschmid.

A settlement based on garden city principles offered Schmidt both the space needed to expand his production, as well as providing healthy living conditions for his workforce, close to his factory. Richard Riemerschmid produced a development plan that created distinct areas, as had been used at Letchworth, including an industrial area, workers houses, larger detached houses and public spaces. A commission was established to maintain a harmonious unity between the buildings created by the different architects, which included Hermann Muthesius. Cultural activities were also seen as important part of the community’s development; the Festival Hall was built in 1911 and quickly became renowned for its avant-garde productions, which continues to this day. Now incorporated into the city of Dresden, Hellerau is protected as an historical monument.

Created by Karl Shmidt, owner of furniture company Deutshe Werkstätten für Handwerkskunst.Planned by (and many houses designed by) Richard Riemerschmid.

Commission was established to maintain a unity between buildings created by the different architects. 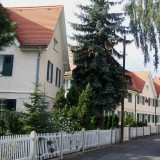