Den-en-Chofu was Japan’s first Garden Suburb, developed on the outskirts of Tokyo in the 1920s to provide housing for rail commuters..

Den-en-Chōfu is an area near the Tama River in Ōta Ward, Southern Tokyo.
In 1907 Eiichi Shibusawa, a wealthy financier, bought the land in order to create a garden suburb, inspired by Letchworth, Hampstead and others.
A British town planner was hired to design the area with large tree-lined streets and parks incorporated, as well as a radiating axial layout like the spokes of a wheel to the north of the station.
The success of the suburb was sealed when it largely survived Great Kanto Earthquake of 1923 which devatstaed much of the rest of the city, leading people out of the centre of the city to the new Garden Suburb.
Today it remains one of the most exclusive places to live, with houses reaching sizes considerably larger than most other residences of Tokyo, however Den-en-Chōfu no longer considered suburban 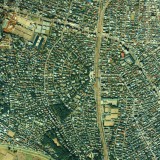