Planned by Walter Burley Griffin and his partner and wife Marion Mahony Griffin (who won a competition). The plans reflected the two main strands of planning popular in the early 1900’s, the immutability of the City Beautiful movement and capturing the landscape and social engineering of the Garden City movement.

Specific reference to the Garden City principles could be seen in the separation of industrial, residential and civic areas by using green areas to create divisions. During its construction Canberra received criticism from many sources, including Garden City advocates, who felt it was ‘disjointed’ and lacked greenbelt space to provide definition.Through the 1960s and 1970s there was little emphasis on the Garden City principles and this led to narrower streets and loss of many front gardens. This culminated in much more densely built housing the 1990s. However contemporary developments are now being built under what Canberra has described as New Garden City values. http://www.planning.act.gov.au/__data/assets/pdf_file/0013/6700/gardencity_values.pdf

Part of ACT (Australian Capital Territory) which has internal self-government since 1988. 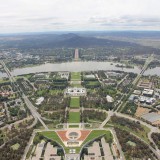