Government funding for infrastructure and private finance from pension funds could support a new wave of Garden Cities to help a generation of young people locked out of home ownership, according to new research launched today.

Co-author Keith Boyfield, an economist and author said: “We know that Garden Cities as places encapsulate many values that people still crave in their living and working environments. They are almost universally seen as a good idea, but we seem to have difficulties creating new ones. Although some new developments badged as Garden Cities and Towns are in the pipeline do they deliver the key elements that conform to and bolster the brand? We looked at how can we overcome impediments and start building proper Garden Cities again.

“The Government repeatedly says it wants to encourage Garden City developments but has been less forthcoming on funding models. Self-evidently, money has a major role to play – public and private.  The more adept the government is at using the instruments at its disposal – including the tax system, planning, governance capacity, infrastructure support and the release of surplus land where appropriate - the better.”

Dr Susan Parham, the Institute’s Academic Director and co-author of the research paper said: “Letchworth and Welwyn draw a large number of UK and international visitors each year to study and explore what makes them work so well today. These are not towns ‘pickled in aspic’ but thriving places where people continue to want to live and work and enjoy a range of amenities. Their success is not just due to the way they look – much as that is admired – it is linked to how well they work: socially, environmentally and economically.”

The authors suggest that as well as public finance, pension funds and life assurance companies should invest in new settlements. Planning and technology also need to be addressed in the creation of new places, they add.

The adoption of ‘Pink Planning’ could play a part, having proved successful in helping to revive the central core of Phoenix, Arizona, after a long period of urban decay. Pink Zones are deregulatory planning initiatives designed to work from the community upwards, in contrast to the top down approach adopted for the creation of New Towns, which today presents a rather mixed picture of success and failure.

The authors also support national consultation on the future of the Green Belt, to establish its future size, shape and purpose in the context of calls for major housing development.

Garden Cities are also well-placed to become Smart Cities, the authors suggest. Historically they were designed to be visionary, and self-financing through community ownership of the land which brings an income to the town. In Letchworth this funds a community health centre, and the authors suggest smart city technology could be adopted in new Garden Cities to support innovative health and wellbeing systems as well as a range of other smart technologies to help accessibility, housing, employment and more.

Dr Parham said: “The Garden City might look traditional – but it can also accommodate all sorts of ‘Smart’ systems to make life better.”

Garden Cities – Why Not? is the first of a planned series of papers produced under the auspices of the International Garden Cities Institute, established last year as a research, advocacy and resource centre for information on Garden Cities across the world. Dr Parham comments that the Garden Cities Perspectives series aims to draw on the views of a diverse range of authors to promote knowledge, increase understanding, generate conversations – and at times perhaps challenge assumptions – about what Garden Cities are or might be.

Co-author Keith Boyfield is an economist and author of more than 90 publications on public policy issues. He is a Fellow of a number of think tanks including the Centre for Policy Studies, the Institute of Economic Affairs, the Adam Smith Institute and the European Policy Forum, as well as the Kosciuszko Institute in Poland and the Euro-Gulf Information Centre in Rome. He has been an adviser to the European Commission and consultant to some of the world’s largest companies and trade groups.

Dr Susan Parham is Head of Urbanism at the Institute’s lead academic partner, the University of Hertfordshire. She previously worked as a consultant urban policy analyst and rapporteur for the OECD Urban Affairs Division, was director for a sustainability policy consultancy and chaired the Council for European Urbanism, as well as for six years until 2015 being Trustee then Vice Chair of the board of the charity, Living Streets. Dr Parham is Fellow of the RSA and an Academician for the Academy of Urbanism.

The Institute was founded by the Letchworth Garden City Heritage Foundation with a wide range of partners including Cambridge University, the International International Federation of Housing and Planning, Sichuan University in China, and Centre of Excellence in Architecture, Environment & Building Cultures (LabEx AE&CC) at the Ecole Nationale Supérieure d’Architecture de Grenoble in France.

Garden Cities – Why Not? is available to download here. 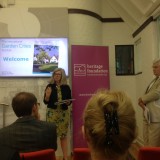