A group from the Korea Planners Association visited the Institute and Letchworth Garden City to learn lessons to help manage declining new towns around the capital Seoul.

The Association is conducting a research project for the Ministry of Land, Infrastructure, and Transport and the Korea Land & Housing Corporation, to find schemes and strategies to manage new towns, that were developed particularly in the late 1980s through the 1990s.

To respond to Seoul’s unprecedented growth in the 1980s, the Korea government decided to develop five new towns outside of Seoul’s greenbelt, which provided new homes for 1.2million people in 300,000 households. Five new towns (Bundang, Ilsam, Pyungchon, Sanbon, and Joongdong) were built in only five years.

Since then, several more new towns have been developed around the country. Now, however, the Korea government is facing many issues resulting from the new towns’ decline. While the buildings, housing, and infrastructure have physically deteriorated, the population is declining/ageing, economic growth is decreasing, and the birth rate has plunged.

The research team are looking for solutions. Jeeyeop Kim, Associate Professor of the Department of Architecture at Ajou University, Dr. Hong-bae Kim, President of the Korea Planners Association, and two other professors came to find out how Letchworth - an almost 120-year-old new town - has been managed; what the roles of the Letchworth Garden City Heritage Foundation, residents, local government, and central government are; and the Foundation’s financial model. 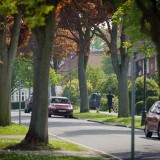