Chinese developers come to Letchworth to learn about our stewardship model

Through our continued partnership with the China Design Centre and the TCPA, we were delighted to host a second group of visitors from Greentown and Bluetown Development Companies, based in Hangzhou.

Earlier this summer, a group of 30 visitors spent time in Letchworth learning how stewardship models and long term land value capture have been applied using Ebenezer Howard’s principles.  They followed their colleagues who visited Letchworth earlier in the year.

Over two days, the group took part in sessions where they explored in detail the financial model that has been used in Letchworth for well over 100 years.  They then visited our charitable services and venues, including Broadway Cinema, Theatre and Gallery, Standalone Farm and the Ernest Gardiner Treatment Centre, to get a better understanding of how this model can have a genuine impact on the quality of life for local communities.  We then explored community engagement models to explain the decision making process and how this relates to community governance.

Our visitors showed a keen interest in the role of volunteers around our governance and running of the organisation to ensure that places are maintained in the long term.

Then it was time to explore developments further afield so the group headed off to Milton Keynes, Cambridge, Stroud and Stratford as well as meeting representatives from the Cecil Gascoyne Estate and TCPA.  They also spent time with the International Garden City Institute’s Academic Director, Dr Susan Parham, who was able to talk about urban agriculture and local food growing principles.

Having visited examples of developments undertaken by this company, who are one of the largest developers in this region of China specialising in new settlements, I can say the schemes are of a high quality and that they take a master planned approach with good quality homes in well maintained and landscaped environments.  Their developments include an appreciation of understanding the needs of older people, local food production and access to the countryside.

We believe that such visits and meetings increases the chances of good quality places being built, which reflect the core values and principles at the heart of the Garden City Movement.  They also provide practical advice for developers, such as Greentown and Bluetown, to assist their governance and stewardship of their new settlements.

Overall, this learning is key to a wider understanding of Garden City principles. 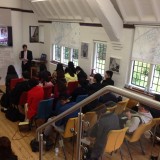