Autumn blog from our Academic Director

Well autumn is really with us now. As a reminder, a perfectly gold toned leaf fell into my bag in a precisely executed dive as I walked to the bus the other day - just in case I hadn’t got the memo. Here at the Institute we are remaining upbeat, despite the days drawing in, as there are a number of things guaranteed to make us cheerful.

You might have heard the excellent documentary about Garden Cities presented by Dan Cruickshank a couple of weeks ago on Radio 4. If you missed it, you can find it here. Dan traces Ebenezer Howard’s ideas in the evolution of the Garden City as a set of principles and as actual places, speaking to a fascinating range of people about how that has played out both in Letchworth - and around the world (as Nicholas Parsons would say!). Our own Josh Tidy featured and I too was interviewed – alas, my great thoughts ended up on the cutting room floor.

We have recently enjoyed a number of visits from students studying at undergraduate and masters level.  These have been really interesting as a chance to discuss Garden City ideas and hear about a wide range of proposals for livable Garden Cities in the future. One such visit saw the Institute and the Letchworth Garden City Heritage Foundation (LGCHF) host my University of Hertfordshire Sustainable Planning masters students (we are the Institute’s lead academic partner) on a study visit to become familiar with the Garden City in planning and design terms. The students received a detailed brief from David Ames, the LGCHF Head of Heritage and Strategic Planning, giving students some planning context for an assignment they are working on about the issues and challenges in developing a potential sports hub in the Garden City.

A longer-term student project is being run by my colleague from the University of Hertfordshire, Dr Paul Cureton, who has been working with his interior architecture students to explore projects with both Letchworth and Welwyn Garden City focus. Second year interior architecture students are looking at how to live in a Garden City in future (with reference to Wolfson Prize bids) and work is also being done on the Shredded Wheat site in Welwyn Garden City.

This month the Institute has also played host to a substantial group of architecture students from the University of Brighton who are considering food in relation to Garden Cities as productive landscapes for the future. After briefings from David Ames and I, the students presented us with their initial architecturally based ideas for future Garden Cities, producing some intriguing and sometimes unexpected proposals (some in the form of three dimensional models and videos). They will be working on these further at an intensive week in Letchworth in mid-November, based in a shop front which is being offered by LGCHF for use as a pop-up design workshop space.

On other fronts, as discussed in my last blog, this week I presented the Institute research plan to the management group at the University of Hertfordshire and I am pleased to say that the research, teaching and related activities achieved and those proposed were both well received. On that front, work continues on a number of research bids I mentioned in my last two updates: one on food and Garden Cities and another on planned settlements and health; both of which would, if successful, draw in a range of local and other partners from further afield on these critical topics for a healthy urban future.

One last item worth mentioning in the ‘last but not least’ category is receiving a copy of Professor Stephen Ward’s marvelous new book The Peaceful Path: Building Garden Cities and New Towns (2016) out with UH Press. The book explores the roots behind Garden Cities and was launched at the Institute a few weeks ago. Professor Ward is one of our foremost scholars of Garden Cities and here he traces not only the evolution of Garden Cities, but how influential these ideas were in the development of the very different world of the post war new towns and the way this history sets the scene for today’s new round of Garden Cities in the UK and elsewhere. I am very pleased to say that Professor Ward’s incredible depth of scholarship does not get in the way of a highly readable style; a book to savour for anyone interested in Garden Cities, past, present and future. 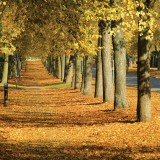