We were disappointed to read the article on Healthy New Towns and the Garden City movement (Healthy towns alone won’t cure the ills of urban planning), by Simon Jenkins in The Guardian.

Garden Cities have been an enormous success: the idea has gone round the world since Letchworth became the first ever Garden City in 1903.  They are a social, economic and community model, which places local people at the heart of decision making, while increases in land value are captured for their benefit.  In Letchworth this means that there are a series of charitable services and grants funded by a capture of income from a property portfolio, governed by local people. This even funds a free private treatment centre.

These principles can be applied to both new developments and regeneration projects (both of which we advocate), particularly when exploring alternative ownership and housing delivery models.

There are now examples on every continent which incorporate green space, walkable neighbourhoods, healthy environments and zoning to keep industrial pollution away from homes, saving millions of people from living in squalor.

Healthy New Towns is an interesting plan to address health problems by adding new elements, such as embedding the latest technology, to these original Garden City tenets, which sought clean air and healthy environments.

While, Simon Jenkins is right in flagging up concerns that ‘Garden City’ may be used as a euphemism for putting power in the hands of developers, its original core principles, which we continue to advocate and when applied correctly, must be part of the discussion when planning new places and regeneration of existing towns and cities. 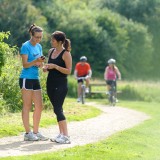