International Hello! Well, we are definitely into autumn now and the leaves have again been spectacular here in Letchworth Garden City. At this time of year, the beauty of the landscape-led approach to placemaking really shows as you walk along tree-lined avenues and streets around the town. It’s been a busy and interesting two months at the International Garden Cities Institute with some great academic visitors, and other relevant research work to report on.

In September I attended the yearly UK Planning Research Conference, this year held at the University of Liverpool, where I presented a talk about research we are currently undertaking in Letchworth Garden City that links planned settlements and food. I particularly focused on the healthy places aspects of the work, showing how a more conscious approach to food can help make places and people healthier. I noted how prescient Howard’s proposals were in foreshadowing ideas that now have become much more mainstream that food, health and place are closely intertwined - or should be.

As I have previously reported in this blog, this research project, the Edible Cities Research Network (EdiCitNet for short), is European Union funded and involves a large number of partners around Europe as well as in Africa, South America, and China. EdiCitNet is running for some four years and is very applied in its focus, with the intention to make practical benefits in a range of places and develop food led approaches that can also be used elsewhere. In some of the bigger partner cities ‘Living Labs’ are being set up to test out food project ideas, while in smaller cities like Letchworth, although our input is more modest, we too are offering some food focused proposals to make places work better in food terms. To do that, we have been helping develop and facilitate a ‘City Team’ made up of community stakeholders in Letchworth to explore how we might create some ‘Edible City Solutions’ for Letchworth over the next few years.

Of course, as we know, Ebenezer Howard was very concerned with developing a localised food economy and system, and this is an important context for the project. The food led projects developed through EdiCitNet are intended to help with Letchworth’s food related resilience in the context of climate change, and food poverty for some of its residents. They will also contribute to the wider EdiCitNet research project’s plethora of food based urban interventions around Europe and beyond. The City Team has now met a number of times and identified both a long list and now a short list of potential edible city solutions. Fortunately as part of the Edible Cities Research Network, we have access to some external experts on aspects of food and place. We will be interacting closely with them to learn more about what has worked well elsewhere and help shape our own proposals.

Also in October as part of EdiCitNet I travelled to Girona in Spain to take part in a wider project workshop with EdiCitNet representatives from other cities and towns involved in the research. Some of you may know that Girona has been the site for filming part of Game of Thrones and the weather while there was suitably stormy at times. It was fascinating to hear about the progress other are making and the kinds of food related proposals that are emerging through the EdiCitNet process. Although none of the other partners come from a garden city, some are from places that have some garden city type characteristics, so there are some interesting points of comparison.

In Girona, I was able to feed back to participants where our City Team is up to in exploring the research possibilities and our initial ideas for the kinds of food led solutions we might want to focus our energy on. City Team members are very interested in permaculture based approaches, in the opportunities for new community garden and orchard possibilities, and in food education, training and skills based initiatives, among other potential projects. It is exciting that Letchworth’s ideas about food, in part stemming from its garden city patrimony, can have this wider ‘reach’ to help make other places more food conscious in their planning, design, economics and social life. In future blogs, I will report in on our progress as we develop this research.

In late October we were honoured to host a visit by Professor Jose Geraldo Simões Junior from Mackenzie University in São Paulo who is undertaking research in the United Kingdom and France to advance his study focusing on the work of Barry Parker in Brazil in 1917-19. Prof Simoes is a Parker expert and was able to share some fascinating primary research sources and information about the architectural and master planning work done by Barry Parker in developing Jardim America and some other garden suburbs built on the edge of São Paulo in that period. It was wonderful to see some of this material which comes from Brazilian archive sources. During Prof Simoes’ visit we also spent some time in the New Town of Hatfield and explored how some garden city ideas and place shaping approaches were transformed in the development of new towns in the post war period.

Overall it was excellent to make this South American connection and I am hoping Prof Simões will write us a think piece about Barry Parker’s time in South America which we will post on the IGCI website in due course. In the meantime, for those interested in reading a little more about the garden city experience in South America do look at two leaflets I wrote for the International Garden City Institute on this topic: about Brazil and Argentina.

Happy reading until my next blog! 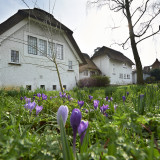