Hello! Well winter is really upon us now, and as I type this I can see dark bare tree branches from my window and a grey and gloomy November sky. I always think November weather is the nastiest of the winter months (actually February runs it a close second) and things actually improve closer to Christmas. I am clinging to that thought anyway.

It has been a busy two months here at the International Garden Cities Institute.

Early in October I took part in an intriguing roundtable at the Town and Country Planning Association: ‘Empowering Communities to participate in planning for new communities’. It was a great event where I learned a lot from a range of practitioners, community organisation representatives and other academics about the complex area of properly engaging with people about new places. The TCPA held the roundtable to help them in their development of a practice guide on the topic, which I think will be a very welcome addition to advice in this incredibly important area. Once completed this will be added to their growing number of such Guides that offer a great repository for good ideas in line with garden city principles about delivering new places.

Fortunately I didn’t seem to have put off the TCPA and they invited me back to take part in a second roundtable - this time relating to food and garden cities - a long term research interest of mine. In fact I am helping the TCPA to write another guide in the same series which looks at how food - urban agriculture and more - relates to Ebenezer’s Howard’s original principles, has played out in the way garden cities have developed to date and can be a central part of delivering new garden cities today. I’ve sent off some text to the TCPA today and I am hoping it will be a useful addition to the forthcoming guide.

Another intriguing event I attended in October was held at Kellogg College, Oxford, where I do some Masters’ teaching on sustainable urban development. I was really pleased to have the opportunity to take part in Kellogg’s Urban Knowledge Exchange (KUKE for short) on the topic of affordable housing. It was fascinating to hear about the broad scale planning and development issues from expert speakers including Lord Bob Kerslake and Prof Yolande Barnes of UCL, and about the struggles even so apparently blessed a place as Oxford experiences in helping to provide sufficient affordable and high quality housing. In the Q and A  I made a plea for this to be thought about as part of delivering good places - not just housing pods - and that at least some of these places should be delivered in line with garden city principles.

It was all go in October and the next event on the horizon was the launch of ‘Re-imagining the Garden City’, a Letchworth Garden City Heritage Foundation and Royal Institute of British Architects competition to design a new part of Letchworth which is going to be build on the northern edge of the town. This was launched by a parliamentarian, Sir Oliver Heald, so rather excitingly it meant going into Portcullis House for the first time (I managed to go through the wrong door but they were very nice about the way they chucked me out to go in at the right one). As LGCHF explains on its website: ‘the design and ideas competition Reimagining the Garden City invites architects to unleash their creativity to explore modern garden city living and place making to meet today’s needs, using a potential development site in the world’s first garden city as a case study. The competition is open internationally to architect-led design teams, with inter-disciplinary collaboration encouraged, as is collaboration between practices of different size, expertise and experience.’ LGCHF go on to say that:

Today, the need for new homes means that there will be an expansion of the urban area of Letchworth for the first time since the 1980s, and this creates a real live case study for the design competition, with the design concepts generated by the winning team informing the overall master plan and subsequent build. The approximately 110-acre case study site is located just north of the Grange Recreation Ground and is included in the North Herts Local Plan for housing.  The Local Plan is due to be adopted in 2019 and includes proposals on this land for 900 new homes – 40% of which will be affordable housing. There will also be a 2-form entry primary school, with 900 sq m of local community facility and retail space.

The Foundation is seeking to recapture the pioneering spirit of the founding years of the Garden City where many of the original Letchworth homes were designed by architects Barry Parker and Raymond Unwin and incorporate the much admired, simple yet beautiful, design details and elements which embrace the harmonious use and inclusion of local materials, light and fresh air.  Their approach to design for people’s homes was largely inspired by the Arts & Crafts movement, which celebrated thoughtful and sustainable design. For the Reimagining the Garden City competition the Foundation believes that these values can be repeated to meet modern needs and encourage sustainable living, which can influence new garden communities across the UK and beyond.

As one of the design competition judges, and of course someone very interested indeed in the future of Letchworth and garden cities more generally, I am really looking forward to seeing in due course what is submitted for this exciting competition.

It hasn’t been all events though. With colleagues, Dr Stephane Sadoux and Dr Matthew Hardy, I have been researching and writing a paper about the language of new and traditional urbanism - and research area which has some very close connections to garden cities. We were lucky enough to be invited to present our paper at an interesting workshop in Paris: “Wording Urban Diffusion” co-organized by the Diffuse Cities & Urbanization Network (DCUN) and the French Research group “Vocabularies of architectural and urban design across time” (CNRS-AUSSER). The event brought together scholars - mostly architects but a few urban designers, planners and sociologists like me - to look out how we talk and write about suburbs and what that means. We were hosted by a ‘Grands Ecole’, the National School of Architecture, Paris East, in a terrific 1880 era technical college building, making a great setting for a thoroughly modern architecture school.

One of the pleasures visitors to Paris who arrive by train at Gare du Nord is to discover a previously less well-known part of the city. I have been getting to know the north eastern side of Paris rather better than I used to, and as well as a really stimulating event itself, I very much enjoyed exploring some streets and spaces new to me in the 10th and 11th Arondissment of Paris’s north east.

Finally this month I am really happy to announce that we have a new Perspectives Paper, ‘Garden Cities – Visionary, Popular and Viable?’ which is available to download as a PDF on the International Garden Cities Institute website. Written by Mr Anthony Downs, Mr Gavin Murray and me, with illustrations by Mr Pablo Fernandez, the Paper is based on an entry we submitted to the Wolfson prize for economics on the topic of building new garden cities. We have updated and extended the (commended!) work we did for that competition and it looks terrific. This is due to Pablo’s great illustrations and all the extra design work put in by my colleague Josh Tidy to whom a great deal of thanks are due. Do check it out if you can.

Well that’s it from me until the New Year so I will take this opportunity to wish you an extremely Merry Christmas and an exceptionally Happy New Year. Speak to you again in 2019. 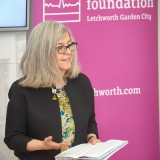