I hope you have had an excellent summer and enjoyed at least some holiday time. As I write, a late burst of summer heat is on the way and here at Letchworth, garden city residents are out and about enjoying the warm weather before Autumn sets in.

There have been a number of interesting things to report over the summer period. In June I was able to attend the Town and Country Planning Association’s Parliamentary Reception at the Houses of Parliament in London. The event, hosted by Lord Best, was to celebrate the centenary of the Addison Act which was the origin of council housing in the United Kingdom, and to hear more about the TCPA’s proposed Healthy Homes Act.

As you know, one of the underlying prompts for Ebenezer Howard’s proposal of garden cities was to deal with abysmal housing conditions for poorer residents of London (and other industrial cities) in the late 19th century. Shockingly, today in 2019, we find a renewed need to advocate for decent standards for homes as here in the UK a series of office block conversions, dwellings with rooms without windows and rooms which don’t meet minimally acceptable space and other standards are being offered as housing for those with little choice in the housing market. As the TCPA explained at its launch event, in early May 2019 the Association launched a call for new primary legislation which, through ten high level principles, would help define what constitutes a decent quality home. The call was in response to growing concerns that the quality of too many homes being built today was undermining people’s health, safety, wellbeing and life chances.

Over the summer period we have also made substantial progress with an exciting research project into ‘edible cities’ in which the Letchworth Garden City Heritage Foundation is a partner. This is the ‘Edible Cities Network’ which is international EU funded research running over five years and I reported on in more detail in an earlier blog. As part of my role at the International Garden Cities Institute I am helping a ‘City Team’ at Letchworth work on developing possible ‘edible city solutions’ which will support Letchworth’s sustainability, resilience and social inclusiveness in food terms. These will also as far as they can reflect Ebenezer Howard’s original conception for food in a garden city context. The City Team recently held a really productive workshop brainstorming a substantial number of possible project ideas and thinking about which ‘edible city’ actions would be most useful to develop in and around Letchworth. Do look out for more news about this as the research progresses.

Also on a food and garden cities front, our Herts Knowledge Exchange Partnership scholar has completed her very successful year of working with the Heritage Foundation on food economy issues including detailed food resources mapping around Letchworth. This is proving a valuable resource for understanding more about sustainable food in the garden city that can help with applied projects in future to support a fully rounded garden city in food terms. Ms André, our HKEP scholar, will shortly be publishing a series of think pieces on the IGCI website, (see some existing ones here!) and will be giving an illustrated talk about her work in Letchworth in due course at the Heritage Foundation which will be very well worth attending. Again, we will be publicising that on the IGCI website. In the meantime, you can also read more about Amélie’s work here.

In June, Letchworth was the very appropriate venue for a highly topical conference on ‘How Garden Cities Can Become Connected Cities Integrating New Garden Settlements with Existing Communities’. Despite a lot of political energy going in other directions at the moment in the UK it is good to see that there is still some capacity for focused attention on protecting and advancing garden cities in the future as part of making sustainable places. You will remember I reported on another piece of work relating to the future of garden cities in a blog earlier this year. If you haven’t caught up with that do check out our most recent Perspectives Paper on How to Make a Garden City that is Visionary, Popular and Viable which can be downloaded from our IGCI website.

Well, that is all for this blog. I am off to the planning research conference at Liverpool University on Monday where I am going to be reporting on the range of food-focused garden city research we are undertaking in Letchworth at the moment. I will tell you more about that in my next blog. 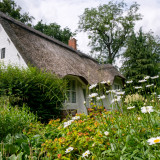