Hello! Well Spring has sprung – or at least started to. With longer days, spring flowers and new green leaves everywhere it’s a lovely promise of things to come. In keeping with this season of renewal, it has been an interesting and increasingly lively period here at the International Garden Cities Institute.

As I touched in my last blog, in the last few months the Letchworth Design Competition through RIBA (the Royal Institute of British Architects) has been underway. The ‘Re-Imagining the Garden City’ competition is for a new part of the town that is going to be developed on the northern edge of Letchworth Garden City. The shortlisted entries from architectural firms interested in designing this new garden city neighbourhood, can be viewed on a website and it is also possible to vote for your favourite scheme by following this link: www.letchworth.com/design-competition. As noted on the website, ‘This design ideas competition aims to discover new design approaches for a modern garden city to meet the needs of the 21st century, whilst recapturing the pioneering spirit that led to the development of the world’s first garden city at Letchworth Garden City.  We hope that this will help shift the debate more towards place making as part of the discussion concerning major new housing development and new settlements.’ Building a new part of town is obviously a vital process for the future development of Letchworth and it will be fascinating to see which schemes the community finds the most relevant to meeting Garden City principles today.

Linked to the Design Competition, an upcoming ‘Great Debate’ at St Martin in the Fields on the evening of April 29th promises to be an exciting event in the continued focus on what the new place should be like and how it should best respond to Ebenezer Howard’s principles for garden cities. This debate and discussion, entitled ‘How Do We Create Great Places in the 21st Century’, will give the shortlisted scheme proponents the chance to explain their ideas and be questioned by the audience. I will report back on this event in my next blog.

As I noted in my Dec-Jan 2018-19 blog, our food economy PhD scholar at the University of Hertfordshire, Ms Amélie Andre has produced some excellent food mapping and other ‘outputs’ from her first year’s work as part of a knowledge exchange partners with Letchworth Garden City Heritage Foundation. Amélie reported on the findings from her work to Letchworth’s Governors at their March Board meeting. It was great to see how enthusiastic the Governors are about food planning for the Garden City. There is a number of areas coming from Amelie’s work with food related stakeholders and places – including in support of urban agriculture – that look like they will be followed up in practical ways.

The ‘EdiCitNet’ research project I have previously written about is also coming along well. We are continuing to develop the ‘City Team’ that will be at the centre of ‘edible cities’ activities in and around Letchworth through the research process. We have also been providing a range of information about Letchworth in food terms for the research consortium and next month I will be travelling to Andernach in Germany to get together with the other ‘follower cities’ and the wider set of partners on the project, review our progress and focus on next steps.

Finally in this blog I wanted to let you know that we have published on the IGCI website a terrific new think piece from a Romanian colleague, Dr Andrei Voinea, who explores a fascinating aspect of garden city inspired development in Bucharest. We are very grateful to Dr Voinea for this excellent contribution to learning about garden city influenced developments that – in my case at least – were not very well known. Dr Voinea explains in his think piece how ‘In the spring of 2012, we noticed a couple of curious streets with standardized single-family dwellings in Bucharest, clearly dated back to the beginning of the 20th century. It seemed strange that in Bucharest, the capital of the newly established Kingdom of Romania (1866-1948), hundreds of standardized dwellings were so rigorously designed and built, as the practice of urban planning was rather new. The traditional urban fabric of Bucharest at that time consisted mainly of narrow streets and alleys and piled up dwellings, lost in the maze of the pre-industrialized city. Therefore, hundreds of almost identical dwellings seemed unusual for the city and pointed to a common institution who designed and built them. Shortly, during the field work, we counted more than forty small districts (lotissements) with standardized coupled single-family dwellings and public institutions (school, churches, kindergartens) all over Bucharest. There was little evidence to understand who designed and built them, as no marble plaques or indicators on the facades were to be found, with the name of the architect or of the promoters.’

Do read the piece on the International Garden Cities institute website (you will find it under ‘research’) to discover the intriguing answer to this ‘garden city’ related mystery! 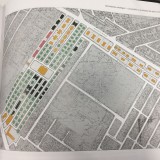