Hello!  I think it would be fair to say that February’s weather has been for the most part a rather cold, wet, grey and windy affair but perhaps the glimpses of sunshine and early flowers peeking out – those first fugitive signs of spring now in evidence – will make further changes in the season even more delightful over the coming month. Notwithstanding gloomy days we have continued to be busy and I hope productive here at the International Garden Cities Institute.

As I reported in my last blog post (January 2017) I have been doing some research on South American garden cities for a garden cities publication series here at the Institute. Having recently completed some work on garden cities and suburbs in Brazil, I have moved on to the exploring the experience of Argentina, Chile and other South American countries for another in our garden city pamphlet series. The garden city of Lomas del Palomar, some 20 kilometres from downtown Buenos Aires, is perhaps Argentina’s most famous of garden city. Its fascinating history; conceived of and then actually created in large part by the German émigré, Dr Erich Zeyen; is an important part of Argentina’s 20th century planning, design and social history.

I admit I was surprised to discover that there was also a very unusual kind of garden city (although really more of a suburb) in Argentina developed in the 1940s – the Ciudad Evita or Evita City – which was designed to look (from above) like the head of Eva Peron seen in profile, with of course that first lady’s famous chignon. Another intriguing contribution made by Argentinian garden cities was the prevalence of the so-called ‘chalet californiano’. This vernacular house style with American colonial antecedents became familiar to Argentinians partly through the movies – and was highly popular first as an upper and middle class holiday house style and then a more modest residential dwelling type built in garden city and some other urban settings.

Closer to the UK, as noted last month, I am also working on an in-depth Garden City Perspectives paper which will be the second in our series of these after Garden Cities-Why Not? (Boyfield and Parham, 2016) was published last year. The focus of this second paper is on how to build a new garden city that is visionary, viable, and popular – and is based on work I undertook with colleagues Anthony Downs (part of our Institute ‘Operations Group’ and an expert on viability issues), and the architects Gavin Murray and Pablo Fernandez (who brought a design and place shaping expertise as well as great drawing skills to the work). That paper should be finished soon and published on our International Garden Cities website in due course. I will let you know when it’s out!

During February I was asked to take part in a Hertfordshire Public Health conference in Stevenage New Town – where I presented in a session on designing and planning healthy places. I used the opportunity to discuss with those attending the very strong ‘healthfulness’ thread that runs through garden city principles and practice from Howard onwards. Today, more than ever, I argued, we need to look at how both physical form of places and the way they are organised in social and economic terms helps us stay healthy. I compared contrasting approaches from garden cities and new towns about how to make this happen although each shared a very strong commitment to good health as a key attribute in planning any successful town.

As I walked from Stevenage Station to the venue (at first I admit in the wrong direction!) I encountered Stevenage’s very large ‘superblocks’ and its network of separate pedestrian pathways round the edges of these blocks, as well as some of its bridges over roads and underpasses beneath them. I mused on the very different spatial form of the New Town compared with a Garden City such as Letchworth despite their shared commitment to health.

On Monday I am due to attend a Future Cities Forum where discussion of garden cities and villages is on the agenda alongside a range of pressing urban issues and ideas including relating to housing materials, offsite construction, regeneration and smart cities among others. I noticed though that garden cities and villages was ‘on’ first up and I hope this reflects the sense that they are particularly central to any discussion of our city futures. 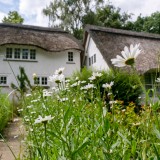