As Spring gives way to early Summer there is plenty of interesting news from April-May 2019 to share with you, starting with further progress on the ‘Re-imagining the Garden City’ design competition that Letchworth Garden City Heritage Foundation is conducting with RIBA – the Royal Institute of British Architects. The shortlist entries have been displayed at the Heritage Foundation’s offices in Letchworth for the last few weeks as well as being viewable on the Foundation’s website and they have received a lot of visitors and comments. The ‘Great Debate’ on the topic, ‘How Do We Create Great Places in the 21st Century’,  that I mentioned in my last blog (February-March 2019) allowed each of the short-listed teams to provide fascinating insights into their proposed approaches to making a new part of Letchworth in the spirit of the Garden City. The presentations provoked a lively debate among a packed audience at St Martin in the Fields and issues including food, culture, sustainability, transport, ecology, future proofing, placemaking, governance and more in developing a new part of the town were thoroughly canvassed.

As foreshadowed in that blog, as part of our current contribution to the international ‘Edible Cities Network’ research project, I travelled to Andernach in Germany to get together with the other ‘follower cities’ and the wider set of partners on the project. Together we spend an intensive four days reviewing our progress and focusing on next steps. Andernach is a small town on the Rhine that is doing some really interesting things in relation to developing ‘edible city solutions’ and we were lucky enough while there to tour the various interventions being made by the local authority: working with socially excluded groups the council has have dug up flower beds to plant vegetables, started an orchard next to their town walls where there is an especially favourable microclimate, planted edible plants on street verges, and built a fantastic permaculture centre and farm at a beautiful foothills site on the edge of town. There was a real enthusiasm from both our Andernach hosts and from the wider range of cities and institutions attending the ‘EdiCitNet’ workshops to explore how all kinds of cities including garden cities can get in touch with their food growing and other food related urbanism possibilities. I should report that there was also some beer drinking and wurst mit senf und brötchen eating as I had hoped.

Last month I was very kindly invited to take part in an event in Welwyn Garden City to celebrate its forthcoming centenary as a city. This took place in the very salubrious surroundings of Brocket Hall on the edge of Welwyn, and this stupendous house was a fittingly celebratory setting to hear about the incredible range of activities and initiatives being planned to celebrate the 100 years of Welwyn. As a researcher one of the most interesting elements from my point of view is the planned international symposium that will be held in Welwyn in September 2020. This promises to be an amazing opportunity to learn more about the way that garden city ideas and principles have played out in Welwyn Garden City and perhaps explore what its next 100 years might be like.

As the Welwyn Centenary website notes: ‘an entirely new community in the green fields of Hertfordshire, Welwyn Garden City realised the vision of Ebenezer Howard to create a town which offered ‘a good life in an honest place’. A landmark in the art and science of town and country planning, the town’s successful development demonstrates the practicality and great benefits of building new settlements. This International Symposium invites planners, architects, developers, academics and politicians from around the world to celebrate the centenary of Welwyn Garden City. What went right? What could have been done better? And above all, how can we apply this practical experience both home and abroad against a context of population growth, climate change and the need for sustainable living.’ This is an invitation I am planning to take up and I hope many other ‘planners, architects, developers, academics and politicians from around the world’ will do so too.

Another highlight was attending the annual Frederick J Osborn Lecture held by the Town and Country Planning Association. This year’s speaker was George Clarke and as reported by Martin Read  in  The Planner, he used the opportunity to call for sustainable and zero carbon house building and to decry ‘the poor image of the built environment professions (“less than one in 10 people want to work in our industry”) and poor quality of housing output…He was, he said, embarrassed that “the profession I love is” is so often described as being dysfunctional. In addressing the economics of mass house building, Clarke said that “somehow, we’ve got to find that balance between minimum space standards and creative spaces,” and that “we can’t keep thinking of property as a commodity”. There were, he declared, no innovation, no quality, no sense of community and no placemaking boundaries. And while in the 21st century we all work differently, eat differently, communicate and buy products differently, in mass housing developments, “we aren’t designing and building differently”.  It was fascinating that George Clarke saw a strong role for state built, ecologically based and affordable new town approaches. As reported in The Planner: ‘The UK, Clarke continued, should be building “the best ecological new town/green towns in the world; we need to build at scale and create amazing towns for 21st century living.” And for new homes to be truly affordable, “the state needs to build again”.

Also on the night the TCPA launched a new ‘Health Homes Act’ campaign and has provided further details on its website where it notes:

‘The TCPA wants to support the need for more, good-quality homes by setting out ten principles about what we believe defines ‘decent’.

These would apply to the flat or house itself but also the neighbourhood within which it is located. This is because we know how important access to green and play space—and the need for places to be ‘walkable’—is to people’s health and wellbeing.

Throughout the campaign we will also investigate poor-quality housing which is affecting people’s health, safety, wellbeing and life chances, with research published intermittently during the next two years.’

Finally this month I want to briefly mention an absolutely terrific talk given by the eminent garden cities scholar, Professor Robert Freestone, from the University of New South Wales, at the University of Hertfordshire’s Urbanism Unit (UHUU) and Smart Mobilities (SMRU) seminar series which I hosted on May 16th. Professor Freestone explored the really intriguing but now very overlooked world of small green spaces in garden cities and suburbs. From an incredible wealth of primary data – including visual examples from around the world – Prof Freestone worked through the advent, evolution, decline and revival of such spaces. It was a brilliant garden city inspired topic and talk and I am hoping to persuade Prof Freestone to write this up in the form of a Think Piece or Perspectives Paper for us at the International Garden Cities Institute in due course. I will keep you posted!

Well I think that is the main news to now. I will be back with more news in late July. Have a lovely Summer until then. 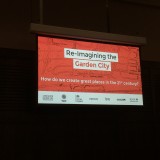