Located on the site of a first century Roman town, Römerstadt was built as one of a series of satellite settlements in the Nidda Valley around Frankfurt.
Ernst May prepared plans for the sites as part of Ludwig Landmann’s wider ‘New Era’ cultural and economic reform of the area. Römerstadt updated the Garden City look, with strong Modernist architecture but followed its principles including the availability of allotments and gardens to create a self-supporting community

opportunities for residents to grow their own food, including generous allotments
Allotments and gardens for self-supporting community

Beautifully and imaginatively designed homes with gardens, combining the very best of town and country living to create healthy homes in vibrant communities
Housing built to be space and labour saving with latest modern conveniences

mixed-tenure homes and housing types that are affordable for ordinary people
Housing schemes were designed for varied social use e.g. old people, single women and families at different income levels. 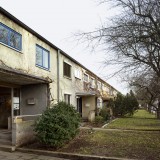