Promoted as the ‘town for the motor age’, Radburn was built upon ideas from Sunnyside Gardens. Billed as a ‘new’ town with the ‘first major innovation’ since the garden cities were first built. It was inspired directly by Letchworth, Hampstead and Welwyn as visited by its Architects. The community was intended to be a self-sufficient entity, with residential, commercial and industrial areas each supplementing the needs of others. The basic layout of the community introduced the “super-block” concept, cul-de-sac (cluster) grouping, interior parklands, and separation of vehicular and pedestrian traffic to promote safety. Every home was planned with access to park walks. The buildings were also designed with a focus on park areas, with living and sleeping rooms facing out towards these areas.
The creation of Radburn was massively effected by the 1929 stock market crash, with only one quarter of the full design being realised. The City Housing Corporation was declared bankrupt in 1934, leaving the town incomplete causing the surrounding lands to be sold off.  It was named a National Historic Landmark in 2005.
Radburn has influenced town planning across North America and particularly the New Town Movement in post-war Britain.

Designed in 1928.
First residents moved in, in May 1929.
Building halted completely not long after the stock market crash in October 1929

Governance arrangements
Radburn is part of the Borough of Fair Lawn. The Radburn Association, the corporate body provided for in the covenant, collects the charge, provides recreational programs, maintains the common property, enforces the covenants and sets policy. The Radburn Association is operated by a Board of Trustees composed of nine people and a manager-director. Trustees are nominated by Board members and elected by the residents of the community and the members of the Association.
The Citizens’ Association is the civic group to which any resident may belong. It serves as a sounding board for public opinion, and through its president, who is automatically a member of the Board of Trustees during his term in office, provides the trustees with information on how residents view current issues, policies. (http://www.radburn.org/index.php/about)

A strong local jobs offer in the Garden City itself, with a variety of employment opportunities within easy commuting distance of homes –
Industrial estate of 127 acres 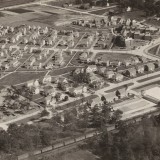 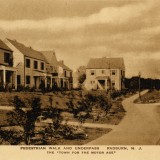