The concept of creating a Garden City in South Africa was as a result of the Spanish Influenza Epidemic in 1918 and the housing legislation that followed it. In Cape Town, the epidemic claimed over 6342 lives with every 2 out of 3 residents contracting the virus. It was commonly conceded that the overcrowding and poor housing had been a major factor in the spread of the epidemic. In 1919 the Citizen’s Housing League lobbied for improved housing legislation, and it was at the same time that the chairman of the Cape Town Chamber of Commerce, Richard Stuttaford, proposed that a garden city be established.
He had met Ebenezer Howard in 1907 and was impressed by his idea of a rural type urban development. The chamber however rejected his idea and so he went directly to the acting Prime Minister, FS Malan, and offered 10 000 pounds for 800 acres of the Uitvlugt Forest Reserve.
On June 13 1919, the House of Assembly resolved to support the offer and in February 1920 the government invested a further 15,000 into the project. Stuttaford did not have widespread support and the Administrator of the Cape, Sir Frederic de Waal, called him irresponsible.  This lack of official support caused problems in gaining housing loans, so Stuttaford put up his own personal securities for each house purchased.
Eventually the first occupant moved in on Saturday 11th February 1922, making Pinelands the third Garden City in the world. Although the new township was to be called Midwood, Pinelands was considered more appropriate due to its origins as a Pine reserve. When Mr Cox moved in, there were other people living in the area. Opposite the shack, on the Oval, was a police camp. On the Ndabeni edge of the Forest was a wood and iron hospital built for the 1900 Bubonic Plague patients but by 1922 housed a few elderly residents.
Despite the huge role that Sir Richard Stuttaford played in founding Pinelands, his name will not be found anywhere in the suburb. In the early days of Pinelands, Richard Stuttaford had agreed that Garden Cities could name a road in his honour. Three name plates were erected in the road. The next morning, all three plates were found vandalised. Garden Cities also received a letter from a resident in the street, objecting to the Stuttaford name being used. The road was renamed Central Avenue. Since then the Stuattaford family has declined requests to use the Stuttaford name in Pinelands.
In 1948 Pinelands became its own municipality and it was not until 1996 that it was merged with Cape Town. The original township site is now proposed as a heritage site.

Original master planner and any other critical master planning, design and architects
Albert John Thompson, an assistant of Raymond Unwin for some 19 years previous to his appointment at Pinelands, in Buxton, and then in both his Letchworth and Hampstead offices; also the master planner of Swanpool Garden Suburb in Lincoln, and chief of works on another Parker & Unwin project, Rockside Hydro, near Matlock.

Architectural Style/qualities
Pinelands was known for its idiosyncratic thatch roofs which were specified for all houses build in the suburb until years later when fire and economic considerations led to other roof materials being allowed.

Governance Arrangements
Made municipality in 1946, became a suburb of Cape Town in 1996.

Stewardship Model
Founded by Garden Cities Trust (now Garden Cities); A subsidiary added in 1930 called Pinelands Development Company was initially founded to subsidise homebuyers’ 20% deposits, but now reinvests profits in building further development, all along Garden City lines. The Deed of Trust that was signed at Garden Cities’ founding, stated its main purpose was ‘to provide better housing and social conditions for the people, the latter purpose to be construed in its widest sense’
A further body, The Archway Foundation, is Garden Cities’ corporate social investment arm, which focuses exclusively on building school halls.

Value capture mechanisms
Garden Cities is “dedicated to the development of entire suburbs, the construction of houses and public buildings and the nurturing of education equality through providing school halls to redress decades of disadvantage.” 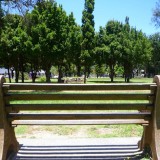