Margarethenhöhe, Essen was founded in 1906 by the Krupp steel company, whose employees made up half of the suburb’s residents.
Built on garden city principles, the architect Georg Metzendorf separated the suburb from the city with a wooded greenbelt. At the centre of the town was a market square with public amenities, from which narrow side streets curved to limit through traffic. Additionally, It was the first Krupp initiative not to limit residency to Krupp employees. In 1915 just 45% of 1,300 residents worked for Krupp
The town required extensive restoration after being damaged during the Second World War. It was made a protected historical area in 1987.
The garden suburb and the later post-war development of Margarethenhöhe II are still owned and managed by the Margarethe Krupp housing foundation.

Original master planner and any other critical master planning, design and architects
Georg Metzendorf and Robert Schmidt.
Developed by the Margare1thenhöhe Krupp Trust

Architectural Style/qualities
Gables on housing, comparable to Bourneville.
Gardens placed behind the houses, providing expansive views across open green space.
Metzendorf took inspiration from Parker and Unwin by using aspects mediaeval German villages to create the image of a walled city. He also allowed streets to follow natural contours of earth.
Buildings- Limited palette of materials stucco, slate and tile. Stucco applied in different textures and colour hues.
Influenced by Raymond Unwin and Camillo Sitte – e.g. Diversion of traffic from the town centre.
In much the same way as early Letchworth has a distinct ‘look’, all of its buildings follow the same stylistic concept, with slight variations for each one.

a strong local jobs offer in the Garden City itself, with a variety of employment opportunities within easy commuting distance of homes 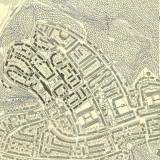