An ambitious gartenstadt development due to the inhospitable land, Marga’sdesign is reminiscent of Ebenezer Howard’s indicative diagrams, featuring a circular layout with a central town square with public buildings, surrounded by houses within generous gardens. These were separated from the adjacent industrial area by a greenbelt. The town was much neglected until the end of the 20th century when both the town and its industrial areas were restored and redeveloped, to enable the two to work alongside each other as originally intended.

Architectural Style/qualities
There were 15 different vernacular styles for the 78 houses.
Inspired by English country cottages and half-timbered designs from rural Saxony.

Beautifully and imaginatively designed homes with gardens, combining the very best of town and country living to create healthy homes in vibrant communities
Emphasis was placed on the welfare of the workforce and on high quality houses that provided good ventilation and light

generous green space linked to the wider natural environment, including a surrounding belt of countryside to prevent sprawl
These were separated from the adjacent industrial area by a greenbelt. 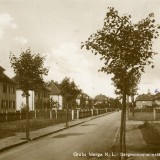 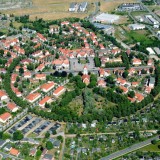