Greenbelt is one of three government sponsored ‘greenbelt’ communities. The Federal Government’s Resettlement Administration had three main objectives:
- to demonstrate a new kind of suburban community which combined both city and country life,
- to provide good housing at reasonable rents
- to provide jobs to unemployed workers.
Greenbelt’s design favoured lengthy cul-de-sacs and circular drives which resulted in a less compact road layout, which rendered it less pedestrian friendly.

Greenbelt was settled in 1937 as a public cooperative community in the New Deal Era. The concept was at the same time both eminently practical and idealistically utopian: the federal government would foster an “ideal” self-sufficient cooperative community that would also ease the pressing housing shortage near the nation’s capital. Construction of the new town would also create jobs and thus help stimulate the national economic recovery following the Great Depression.  It was inspired partly by the design of Radburn.

Planned in 1935. After WW2 it was turned into a cooperative, with excess land sold off to developers.

Original master planner and any other critical master planning, design and architects
Planned in 1935 by Hale Walker. Designed by Reginald D. Johnson and the partnership of Douglas D. Ellington and Reginald J. Wadsworth.

generous green space linked to the wider natural environment, including a surrounding belt of countryside to prevent sprawl, well connected and biodiversity rich public parks, and  a mix of public and private networks of well-managed, high-quality gardens, tree-lined streets and open spaces

a strong local jobs offer in the Garden City itself, with a variety of employment opportunities within easy commuting distance of homes

Integrated and accessible transport systems – with a series of settlements linked by rapid transport providing a full range of employment opportunities?? 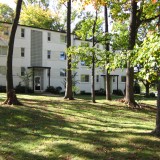