Buckingham played a significant role in the development of affordable, well-planned garden communities in Arlington County, and its success and acceptance subsequently affected housing policy in the United States.
The first phase of the multi-family apartment complex was designed. It was constructed by Paramount Communities, Inc. between 1937 and 1938. Lueders and Kamstra executed the subsequent phases of development, following Wright’s inspiration for community planning. Intended to be a middle-income neighbourhood, the complex was financed by the Federal Housing Administration (FHA), with insured mortgages for each of the building phases. The tremendous popularity of the first phase of development at Buckingham, coupled with the great need for quality, affordable housing in Arlington County, prompted Paramount Communities, Inc. to increase the rate of production so more units would be available during the first year.

Original master planner and any other critical master planning, design and architects
Henry Wright, assisted by Albert Lueders and Allan Kamstra
Allie Freed chose Henry Wright to design the buildings and site plan for his community, as Wright was known for his work as a promoter of the garden city principles. Wright had collaborated with Clarence Stein at the Sunnyside Gardens project outside of New York City as well as the Radburn, New Jersey project.

Stewardship model
Through historic tax credits, low-income tax credits and an affordable housing program, Pershing Drive Associates has been able to maintain the original architectural integrity of the community and create a thriving community which will continue to endure as a model example for middle-class, rental housing.
Buckingham passed through several owners before Pershing Drive Associates, Limited Partnership, a joint-venture between Paradigm Development Company, Arlington Housing Corporation and Arlington County, purchased the property in February 1996

well connected and biodiversity rich public parks, and  a mix of public and private networks of well managed, high-quality gardens, tree-lined streets and open spaces;
“the site plan was designed so that approximately 20% of the land was covered with buildings and the remainder “devoted to landscaped parks, play areas, and streets”“ 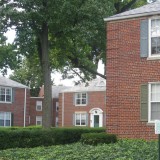