Founding partners including representatives from the Town and Country Planning Association, University of Hertfordshire and leading property developers met this week to formally launch the International Garden Cities Institute.

It is the realisation of a long-term ambition by founder Letchworth Garden City Heritage Foundation to bring together expertise to showcase international Garden Cities as a solid model for new development, in recognition of their global influence.

Founding President Lord Salisbury, Chancellor of the University of Hertfordshire said: “Hertfordshire is rightly proud of its record as host to the two earliest Garden Cities: Letchworth and Welwyn Garden City. The world is urbanising at a very rapid rate.  It is therefore important that growing towns and new settlements should be developed in a way that provides people with a rewarding and agreeable place to live and work. The International Garden Cities Institute, in taking this initiative, can make an important contribution towards achieving this objective. I am honoured to be associated with it and hope that, between us all, we can establish a network dedicated to bringing these early principles up to date and into effect.”

John Lewis, Chief Executive of the Heritage Foundation said: “As the world’s first Garden City Letchworth has had an amazing influence and inspired a global movement to create better places to live. We have been keen to bring all this learning back to where it all began to provide a valuable resource for future generations.”

The Institute aims to support renewed interest in creating Garden Cities, from China to the UK. It will bring together experiences from global Garden Cities and showcase modern interpretations, to help advocate a new phase of their development across the world.

Professor Jonathan Morris, Director of Research of the Social Sciences, Arts and Humanities Research Institute of the University of Hertfordshire said: “The University is very proud to be the Lead Academic Partner of the International Garden Cities Institute, and looks forward to working with the Heritage Foundation and the other Founding Partners to demonstrate the continuing relevance of the Garden City Principles today.”

Dr Susan Parham will be the Institute’s inaugural Academic Director, and will propose academic projects and engagement opportunities for the Institute, relating to the development of the Garden City model. She is the Head of Urbanism at the University’s Centre for Sustainable Communities and has particular research interests in the urbanism of Garden Cities and New Towns, so is ideally placed to support the work of the Institute and the aspirations of the Founding Partners.

Dr Parham said: “The founding of the new International Garden Cities Institute offers an incredibly exciting opportunity to explore the complex heritage, contemporary practice and possible futures for Garden Cities (and New Towns) in the UK and elsewhere. My colleagues and I at the University of Hertfordshire are very much looking forward to working with partners here and internationally to research some of the fascinating themes that are emerging in this very topical place-making area - and to apply our knowledge in as useful ways as possible.”

The Institute will facilitate discussion and debate, with seminars and publications, and will be a centre for research and learning.

Particular emphasis will be placed on the cultural, social and community component of the Garden City Model, in order to advance the debate on future towns so the focus is not solely on master planning and urban design. The aim is to develop greater understanding of how to create great places to live, which is at the heart of the Garden City Model.

The starting point for all of its work will be the Garden City Principles, how they have been applied internationally, and the work of Ebenezer Howard, the visionary behind the Garden City ideals, who founded the world’s first Garden City in Letchworth.

He aimed to overcome urban squalor created by industrialisation, by marrying the best of town andcountry. Letchworth’s success proved his idea worked and led to further Garden Cities and Suburbs on every continent.

The Institute will be located at the former Parker Drawing Offices, where many early Garden City designs were conceived, and aims to show that the model remains part of the solution to international requirements for growth. It will also hosts the International Garden Cities Exhibition, which explores the founding of the first Garden City in Letchworth and its global impact. 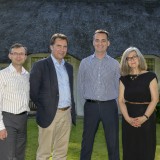