Garden Cities and Suburbs, Villages and Towns all got a mention in the UK Government’s annual Budget and a prospectus published at the same time, Locally-Led Garden Villages, Towns and Cities.

It promises legislation to update the New Towns Act 1981 to support the creation of new settlements and gave a July 2016 deadline for expressions of interest in creating more modest ‘Garden Village’ settlements of 1,500 to 10,000 homes. It anticipates supporting up to 12 such proposals.

Significantly the prospectus states “we are clear that this prospectus is not looking to support places which merely use ‘garden’ as a convenient label”. Rather, it encourages innovative approaches to creating new places which “embed key garden city principles” and explicitly supports land value capture, which “can play an important role in funding infrastructure costs”.

It promises limited Government funding and support, for example for research, and offers broader support to help local authorities overcome barriers to delivery and broker solutions to unblock any issues that arise.

The prospectus states a New Town Development Corporation may be a good option for delivery at scale, to resolve complex co-ordination challenges, and compulsorily purchase land under the ‘no scheme’ rules, as well as providing long-term planning certainty that is likely to be attractive to private sector investors and landowners. 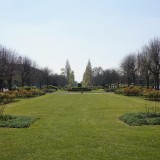