Exploring the 'Cite-Jardins' of Paris

International Garden Cities Exhibition Curator, Josh Tidy, recently paid a visit to one of the many places all over the world which were inspired by Ebenezer Howard’s Garden City idea - the Cite-Jardin of Suresnes, on the Western fringes of Paris.

Josh was warmly hosted by Marie-Pierre Deguillaume, Curator at the MUS (Museum of Urban & Social History), opened just a few years ago in 2013, and was keen to learn more about Henri Sellier, who founded the network of Cite-Jardins all around the outskirts of the capital, developed between the 1920s and 1930s. The MUS is excellent - well worth a visit, with attractive, modern displays exploring the social & industrial history of the town, and the key features of the Cite-Jardin at Suresnes. Interactive displays help visitors explore in great detail, and celebrate the heritage of this historic garden suburb.

Josh was also very keen to find out all about the recently-formed (Nov 2015) ‘Association régionale des cités-jardins d’Ile-de-France’, which aims to bring together all of those different garden suburbs. In this purpose, it shares much with our own International Garden Cities Institute in hoping to bring together all Garden City-inspired places around the world. As such the Association would of course make an ideal Partner for the Institute, and we were delighted to invite them to join us.

He then greatly enjoyed a tour of Suresnes itself, a thriving town, clearly benefitting, almost a hundred years later, from the layout and features which were inspired by Howard’s idea and Parker & Unwin’s master planning. 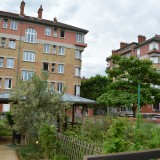 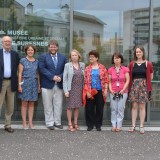 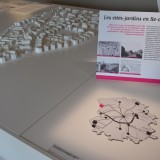 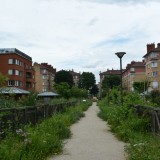 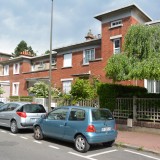