Well, summer is starting to make its presence felt here at the International Garden Cities Institute. In fact as I write this it is muggy and humid but I am not grumbling too much because I am also enjoying the greenery everywhere, more sunlight, longer evenings and flowers and stone fruit in increasing profusion.

It has again been a busy month with some fascinating highlights. One of these is the really excellent exhibition currently on at the Broadway Studio Gallery in Letchworth Town Centre on the work of Barry Parker, a perhaps rather underappreciated architectural pioneer of Letchworth Garden City. As I mentioned last month (April 2018) this is the first major exhibition held about Parker and it runs until Sunday 15 Jul 2018. I was lucky enough to be invited to the opening and managed to check out some of the intriguing work on display in between chatting to other garden city aficionados. I think the exhibition does a magnificent job of showcasing Parker’s contribution to Arts and Craft architecture, with objects from Letchworth’s Parker Collection, including architectural plans and drawings, photographs, furniture and fine art.

The exhibition filled in some gaps for me including Parker’s fascinating ideas (and drawings) of his hexagonal street, block and housing layouts which he argued had distinct advantages over ‘normal’ arrangements including avoiding school children having to cross main roads. For us urbanist nerds this looks clearly to have influenced some slightly later (and very influential ideas) in urban planning such as ‘the neighbourhood unit’.  There was so much that is noteworthy it is hard to pick out particular examples to describe here but among a huge depth of material one that caught my attention was an intriguing unrealised design of a hall for a communal co-operative living scheme for the Socialist, Isabella Ford in Adel, near Leeds. Like the hexagonal plan, this was also an interesting precursor, modelling ‘house place’ ideas which Parker later elaborated in designs for Letchworth’s domestic architecture.

We were also very fortunate this month to receive a visit from a group of academic visitors – academic staff and students from the Russian State Agrarian University in Moscow.  Under the leadership of Dr Natalia Chernykh, these landscape architects were spending a few days in the UK  visiting academic institutions (and most importantly) gardens in the UK to explore the history and contemporary use of urban green spaces including productive ones – thus the strong interest in finding out more about Letchworth and the garden city movement.  The group’s day with us was a really terrific one – starting with an academic seminar in the morning and finishing with a food and gardens focused walking tour in the afternoon. Dr Chernykh presented on her urban public vegetable garden in Russia – including from wartime Leningrad during its appalling siege, and Moscow’s Apothecary’s garden – while Nicolai, a brave student from the university there also gave a beautifully illustrated talk on the evolution of urban greenspace in Moscow in long term historical review – stretching back as far as the 14th century. For me this was a real eye opener and reinforced my sense that I am woefully ignorant about Russian urban history of all sorts – another area I need to learn more about. We also had a great presentation on the initial results from her food mapping research in Letchworth from Amelie Andre and I spoke about Letchworth’s gardens utopian antecedents and contemporary practices.

This month I was also contacted by Judith from Handheld Press who alerted me to the forthcoming publication of a hitherto perhaps little known Letchworth story from the First World War. The Conscientious Objector’s Wife: Letters between Frank and Lucy Sunderland, 1916-1919 collects together letters written over three years by a Letchworth CO and his wife. Researched and written by Kate Macdonald, as the publishers explain “This is Lucy’s Sunderland’s story, a working-class woman who managed to earn an independent living, bring up their three children, attend adult education classes, become politically active in feminist and socialist politics, and write to her imprisoned husband as often as he was allowed letters. Her story adds rich detail to the history of ordinary lives on the Home Front during the war, and is a compelling narrative, which includes insight into the garden city movement.”

So that’s a very brief look at some interesting activities at the Institute this month. I will look forward to talking to you again at the end of June. 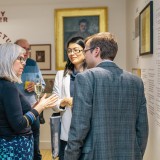