Hello! I do hope you all had a good March despite the rather turbulent times. The spring flowers seem to have arrived – and the daffodils and jonquils are always a cheering sight. A few warmer days really do lift the spirits – and increase the Vitamin D intake too.

The ‘Garden cities – visionary, viable and popular?’ Perspectives paper I mentioned in my last blog is going off for review today so should be in press soon. I explained in my last blog that the focus of this second paper in our Garden Cities Perspectives series is based on work I undertook with colleagues Anthony Downs (part of our Institute ‘Operations Group’ and an expert on viability and place-making issues), and the architects Gavin Murray and Pablo Fernandez (who brought a design and place shaping expertise as well as great drawing skills to the work). I hope to announce it is available to download later in April.

As foreshadowed last month, early in March I attend a ‘Future Cities Forum’ run by the Royal Institute of British Architects in the gloriously renovated 1889 building of the Institute of Engineering and Technology at Savoy Place close to the Thames Embankment. After a terrific introduction by the eminent historian Dan Cruickshank, there was a really interesting discussion about the role of garden cities and villages as part of dealing with the housing ‘crisis’. I suggested that garden cities could also be ‘smart cities’ despite the mistaken idea sometimes put forward that they were some kind of nostalgic carry-over from the past. It was clear that despite some misconceptions about garden cities and villages, there is a shared sense that they are particularly central to any discussion of our city futures. The Forum’s organisers have posted their own blog on this and focused on some comments I made about Hertfordshire’s role which you can find here.

I seem to have had a very engineering focus month as I also attended a convention of editors at the Institute of Civil Engineers in their historic building in central London as part of my new role as chair of the Editorial Panel of the Institute’s journal Urban Design and Planning. While the discussion covered a lot of ground it was interesting to see how extremely relevant place-making including by way of garden cities is to engineers. The days when we might have thought about civil engineers’ work as really just about bridges, tunnels and highway construction (critical those these are) are long gone. The fact that they have an Urban Design and Planning journal in itself reflects the heartening reality that engineering and engineers are keen to understand and contribute more to designing and planning successful places. On that front I will keep you posted about journal papers that are particularly interesting from a planned settlement/garden cities point of view.

This last month I have also worked with my sustainable planning masters students at the University of Hertfordshire, exploring 20th century planned settlements as part of urban design and conservation studies toward their planning degree. It was a real pleasure to talk to them and hear their ideas about the birth and evolution of garden cities in Hertfordshire. Enriching the scope of the planning course, we were lucky enough to have Dr Stéphane Sadoux, the garden cities design scholar, on the teaching team to compare planned settlement experience in France and the United Kingdom. We were also really fortunate to have the opportunity to undertake a masterclass and a field trip led by IGCI partner and operations group member, Mr. Anthony Downs, to look at a number of proposed new developments including a garden village and a walkable neighbourhood with some garden suburb elements.

This month I visited a new exhibition at the reconfigured Commonwealth Institute in west London, now the home of the Design Museum. Its new show ‘Imagine Moscow’ was really intriguing and even rather disturbing at times. Early 20th century architecture and urbanism in revolutionary Russia might seem a very long way indeed from garden cities, and certainly the focus of those designers on the ‘cloud iron’ (the name Russian architect El Lissitzky gave to his eight horizontally cantilevered skyscrapers proposed to be constructed around Moscow) actually remind me very strongly of proposals we are seeing currently by some architects today. You could well point out that this kind of architecture doesn’t fit with our UK ideas about garden cities, past or present. At the same time this exhibition shows some of the seeds of modernism – and you could say Garden Cities were part of that broad movement – reflected internationally in city design, despite huge political differences between east and west. In Russia of the time some of the ideas about utopian city building informing city, building and housing design were based on the idea of the ‘sun city’ utopia of Tommaso Campanella written in 1602, and there were elements of internationalism, communal living and the emancipation of women (if in this case just to work in Soviet factories) which were shared territory with the visionary side of the Garden City. So in some surprising ways there were more connections than I had expected.

Finally, it is great to be able to welcome a terrific new book by a former colleague of mine, Martin Crookston, who has written the excellent ‘Garden Suburbs of Tomorrow? A New Future for the Cottage Estates’ (Routledge, 2016). I am currently reviewing the book for Urban Design and Planning and will provide some more details about Martin’s findings and conclusions about cottage estates in my April blog. A copy is available to read in the Reading Room here at The International Garden Cities Institute. 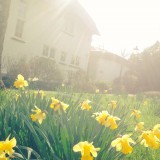