Hello! Well, the last vestiges of autumn seem to be departing now. It’s been really cold, with snow falling and icy pavements underfoot, while shorter days provide a foretaste of deeper winter to come. Here at the International Garden Cities Institute, though, a number of things are warming up and there is good news on a variety of fronts as we move into the Christmas period.

As I mentioned in last month’s IGCI blog, we are really pleased to have appointed a new doctoral scholar, Ms. Amélie André, who is exploring food economy issues in a garden city context. Amelie is working with me, Prof. David Barling, the Director of the Centre for Food, Agriculture and Environmental Management (“CAFEM”) at the University of Hertfordshire, and Mr. David Ames, Head of Strategic Planning and Development at Letchworth Garden City Heritage Foundation, over the next four years on this highly pertinent garden city topic. Just as background, for those like me who want to know how the funding side of how things works, the studentship has been co-funded by the Letchworth Garden City Heritage Foundation (as the ‘industry partner’), the Hertfordshire Local Economic Partnership (the ‘LEP’) and the European Regional Development Fund (the ‘ERDF’).

Amélie is now starting her first year, which will have a very applied ‘Knowledge Exchange’ focus so that any lessons learned can be made use of as quickly and practically as possible. There is a lot of scope to explore (in a highly applied way) how Ebenezer Howard’s very localised food system ideas could be revived and adapted for 21st  century conditions in Letchworth, all along the food chain from farming to food businesses, urban agriculture, food markets and shops, and beyond. I have explored briefly some of Howard’s ideas about food and how this has played out in practice in two think pieces on the IGCI website if you wanted to check those out. There is more on that in my book Food and Urbanism (Bloomsbury, 2015). Through Amélie’s work the aim will be to generate economic benefits for the garden city today and in future, and there may well be wider applicability for other garden cities, garden villages, garden suburbs and new towns including those being planned now around the UK. So, as a University of Hertfordshire doctoral scholar, Amélie is exploring very contemporary and pressing food economy issues in Letchworth Garden City over the next four years, and I am sure that her expert academic and professional background in architecture and working on community place-making projects will stand her in very good stead in undertaking this research. There will be more details about the progress and findings from Amélie’s work in the months and years to come.

Also on the learning and teaching front, in November we ran our UH Masters’ in Sustainable Planning module on spatial planning, in part here at the Institute in Letchworth. Each year we benefit from a detailed briefing and tour in relation to Letchworth Garden City from expert Letchworth colleagues, Mr. David Ames and Mr. Josh Tidy. This year, students and Continuous Professional Development participants focused in particular on the planning, urban economy, governance and urban design issues facing the town centre. More broadly we find this teaching (it is also offered as a CPD course) on garden cities is something our students’ value very highly indeed. We think it is critical that the planners of the future have a very good grounding in garden city principles and practices.

As flagged last month we now have the terrific new Garden Cities Perspectives paper from Nicholas Boys Smith and Laetitia Lucy of Create Streets on our website.  Are Garden Cities Good for You? explores fascinating research into links between urban form and wellbeing, and asks if garden cities fit the model of wellbeing optimisation?  It is engagingly written and draws on a wealth of evidence to help ‘unpack’ different aspects that go into any analysis of wellbeing. To find out what Nicholas and Laetitia conclude about links between garden cities and wellbeing, please do download the document from the hyperlink above - and happy reading!

I know that last month I foreshadowed that our new Garden City Perspectives paper on African garden cities, written by IGCI founding partner Keith Boyfield and colleague, Oni Oviri, would be appearing about now. That is still the case and I can report that its ‘imminent’ so look out for that on the website very soon.

Looking beyond our Institute, but with garden city implications, one of the intriguing things that happened in November was the announcement that the government is considering reopening a number of rail lines closed in the light of the Beeching report in the 1960s. Among lines mooted for reopening, or for new rail connections to be made, is the Varsity line between Oxford and Cambridge. There are a large number of other places - areas around communities on the east coast of England spring to mind - where reconnecting towns to the rail network would be a great way to support local economies and provide a context for garden city inspired place making. New or renewed garden village type settlements might provide much needed good quality homes and businesses, and thus help regenerate places that have been somewhat cut off from the ‘hot’ economy of the greater London conurbation and the south-east of the UK.

The connection to garden cities is also a very pertinent one for Hertfordshire where the lack of good east-west public transport connections is a real problem, and one which if solved would have very positive garden city implications. In relation to this I was lucky enough in November to be able to take some of my Sustainable Planning Masters’ students to attend an Infrastructure Charrette run by Hertfordshire based development company Gascoyne Cecil. This intensive ‘engagement’ workshop brought together a number of stakeholders to explore the possibilities for infrastructure development across the county and beyond, including potentially a light rail line from Watford to Hertford. Like the Beeching line re-openings, such a line would offer the opportunity to develop or retrofit ‘transit oriented developments’ (we planners like to call these ‘TODs’ just to make it a bit obscure for everyone else) around light rail stops. At least some of these could in theory be along garden city sympathetic lines in the form of garden villages and towns. Thus far, of course, this is in the realm of scenarios for the future, but I suggested some time ago that given the requirement to better meet the country’s housing needs, ‘[garden] villages near rail lines and good bus routes might help and perhaps this is a way to help reopen some rail lines closed in the Beeching era’ so of course feel vindicated by the government’s proposal! I am very glad to see this is now on the policy agenda.

Hot off the press: Just as I was writing this blog the government also announced through the Department for Communities and Local Government (DCLG) that work on five new development corporation-led garden towns (which were promised in the Budget) will start in 2018. These will be bigger in scale than the garden villages it already supports, many of which are starting to get underway now. This also comes on the back of support for nine garden towns announced in October, and news of financial support for two garden towns, in Oxfordshire and North Essex.

As I won’t be blogging again until early January, I wanted to close by wishing you all a safe, happy and peaceful Christmas and a joyous New Year. 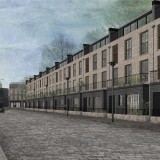