A visit to York

A group of Trustees and members of staff recently attended a visit to the Joseph Rowntree Housing Trust (JRHT) in York.  Staff of the JRHT kindly gave up their time to show us both old and new examples of developments undertaken by the Trust, who share a history and a number of values with the Heritage Foundation.

JRHT has strong links with the early years of the Garden City Movement and developed New Earswick, which is two miles north of the City Of York. It was the brainchild of Joseph Rowntree, founder of the Rowntree Cocoa factory. As was the case with other philanthropic industrialists (such as the Cadbury family at Bournville, the Levers at Port Sunlight and Titus Salt at Saltaire), Rowntree was appalled at the conditions his employees had to endure in the slums of York and had the vision of building a garden village a mile from his factory.

This led to him acquiring 150 acres to develop his model village, with the aim of a ‘rightly ordered and self-governing community’.

Both managers and workers from the factory had the opportunity of living in one of these houses at an affordable rent.

Although these philanthropic businessmen were led by a desire to help address poor living conditions and often by religious influences, a consequence was also that staff who were employed in decent accommodation nearby, were far more productive and loyal to the company.

The master plan was produced by Parker and Unwin in 1902 and is very much seen as the precursor to the plan for Letchworth and no doubt helped support the case for a new approach to creating great places to live and work and their appointment in Letchworth.

Stylistically, the way the master plan (see gallery at end of this blog) is presented is the same as the competition winning Parker and Unwin entry.

The development started in 1902 by the Village Trust, which is now part of the JRHT, with houses modelled on a country cottage with thick walls.

Each house had an indoor toilet along with a good sized garden, an approach later found in Letchworth’s Building Regulations.

The main entrance point to the site from York incorporated a group of houses (Western Terrace), which form a gateway, with attractive houses on the right, fronted by a large area of grass with the Westfield beck meandering through on its way to the River Foss.

Between 1902 and 1904, 28 homes were built and the Parker and Unwin Plan shows a density of 12 dwellings to the acre, as is the case with Bournville and Letchworth.

In terms of layout, Unwin’s aspiration to separate cars from gardens can be seen with no frontage parking provision for some groups of houses, along with examples of separate landscaped corridors providing front pedestrian access, popular in New Urbanism schemes today and post-war Radburn design.

In Town Planning in Practice, Unwin refers to testing concepts in New Earswick and indeed Letchworth.

The Arts and Crafts influence on the design of the homes is evident as you would expect from Parker and Unwin, and many of the house types seen in Letchworth, were tested in New Earswick, including many of the materials subsequently used in Letchworth, such as rough cast render.

Unwin’s involvement reduced once the practice was instructed on the Letchworth and later Hampstead Garden Suburb projects, but as was the case with Letchworth, Parker maintained his involvement and designed many of the dwellings that remain today.

The Rowntree’s religious beliefs prohibited a public house in the village and this remains the case, with only a sports club being licensed.

There is a local community centre, the Folk Hall, which hosts activities such as exercise classes, yoga, snooker, and a junior youth club and recreational facilities, including a swimming pool, tennis courts and football, rugby and cricket pitches are provided at the New Earswick Sports and Social Club.

There are two open access play areas close to the Folk Hall, including a hard surface play area. There is a library based in the Integrated Children’s Centre at the local primary school, a doctor’s surgery and a limited range of shops.

The village has 36 allotments in two areas.

There has been some more recent infill development, where a respectful traditional approach has been taken. It also continues to evolve with more recent developments including specialist schemes for older people and a major development scheme in the pipeline.

Due to the linkages with Parker, we hope to utilise the Folk Hall for a touring version of the Parker Exhibition in 2018.

We then went to visit the JRHT’s current development at Derwenthorpe, which is also a satellite town of York being an extension of the village of Osbaldwick.

This development is a partnership project between JRHT and David Wilson Homes, who were appointed as preferred developer.

The development includes 540 homes comprising two, three and four bedroom homes with areas between 90m2 and 170m2, including private and social housing units pepper potted throughout the scheme.  The ratio is 60% private with 40% shared ownership and socially rented.  The development has been designed to be tenure blind and therefore private and Housing Association should not be easily distinguished. The fourth phase of the development is presently on site.

The new settlement is highly sustainable and includes its own energy system (CHP plant) and highly efficient buildings.

The design of the scheme has sought to be a modern interpretation of Parker and Unwin’s New Earswick village scheme, a precursor to Letchworth Garden City and has sought to reflect the ethos of JRHT.

The development has extended existing residential streets in Osbaldwick, in an attempt to avoid a standalone development.

The master plan worked with existing hedgerows, which have been enhanced to create ecological zones and amenity spaces that thread through the development.

Within the scheme, the different sized houses form part of the design approach and provide enclosure and continuous frontages to the streets and spaces. Larger houses are used adjacent to the surrounding open spaces, including the large central pond, and at key points to create focal points. This is reflective of the approach advocated by Raymond Unwin and remains an example of good quality urban design principles.

Smaller streets are of a high quality and provide efficient traffic calming, without recourse to physical measures in the street.

The master plan includes pedestrian and cycle routes that cross the site allowing easy access between neighbourhoods and directly into the centre of York, via the ‘Sustrans’ route.

Jubilee Pond plays a significant amenity and ecological function, as well as an innovative approach to surface water

The Jubilee Pond, at the heart of Derwenthorpe, provides a safe environment for the breeding of ducks, geese, and other wildlife new to the area. The pond is also a key part of the sustainable urban drainage system (SUDS), and helps to mitigate against flooding and control water flow, but also creates a strong centre piece to the development.

‘The houses are light and well-proportioned with generous flexible rooms, designed to comply with the requirements of both Lifetime Homes and Standards and Quality in Development. Dual aspect main living rooms bring natural light deep into the plan and allow cross ventilation throughout the year, while high ceilings of 2.6m and 2.7m lend an overall sense of light and space.

All houses have been carefully orientated with larger windows facing south and many houses have sunspaces to maximise useful solar gain. The sunspaces act as a thermal buffer throughout the year – collecting solar energy in the winter and helping to cool the houses in the summer, providing secure ventilation at high level, and making use of the stack effect for ventilation. On the street elevations the sunspaces are also used to provide a degree of privacy to the south facing living rooms, while maintaining high levels of daylight. On the garden side they provide a practical indoor/outdoor space where plants can be grown, wet clothes and boots can be left, and children can play with direct access to the garden.’

Dwellings are designed to Lifetime Homes criteria, which has allowed occupiers of different ages to reside there, but also has been attractive to families where there is a disability, due to the easily adaptable nature of the homes.

The design of the housing has taken a fabric first approach with good u-values, low air-permeability, and carefully controlled thermal bridging. Initially they developed two prototype homes, which directed the construction of the first phase.

The construction of the homes uses ‘partial-fill cavity thin bed masonry walls and a structurally insulated panel roof system (SIPS)’, which provide a robust solution for thermal performance and air-tightness, due to minimal penetrations through the air-tightness barrier.

Homes obtain their heating and hot water from the biomass-fired district heating network, housed in an on-site energy centre, known as the Super Sustainable Centre (SSC), which is also used as a community centre and meeting space.

All residents are provided with a travel voucher to assist with purchasing a bike or a free bus pass, an electric car club provides the opportunity to use a car by the hour, and an electric bus service also runs from Derwenthorpe into the centre of York.

Overall it was a really interesting and informative visit, looking at old and new villages by a developer who shares many of our values.

I think we all took something from this and look forward to maintaining a relationship with the Trust.  We hope to welcome the team from JRHT to Letchworth in the near future. 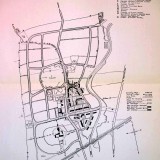 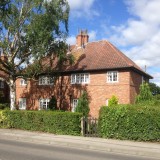 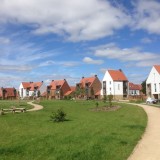 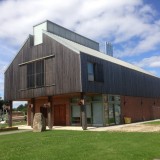